Button Mapper can remap most physical or capacitive keys and buttons, such as volume buttons, some assist buttons, and capacitive home, back and recent apps keys. Button Mapper can also remap buttons on many gamepads, remotes and other peripheral devices.
Download APK
4.7/5 Votes: 76,432
Report
Updated
6 January 2022Size
5.0MVersion
3.09Requirements
Android 4.3 and upGet it on

Button Mapper is a utility for reassigning keys on the remote control such as the Volume, Home, Back, or other buttons.

Button Mapper allows you to easily reassign customizable actions to volume buttons and other hardware buttons. Button reassignment is possible to launch any application, shortcut or customizable action with a single, double or long press.

Button Mapper makes it easy to remap custom actions to your volume buttons and other hardware buttons. Remap buttons to launch any app, shortcut or custom action with a single, double press or long press.

Root is not required for most actions, however some require an adb command from a connected PC if not rooted. Button Mapper does not work when the screen is off unless your device is rooted or you run an adb command.

Troubleshooting:
-Make sure Button Mapper accessibility service is enabled and allowed to run in the background
-Button Mapper does not work with onscreen buttons (such as soft keys or the navigation bar) or the power button.
-The options shown in the app depend on the buttons available on your phone. Not all phones have home, back and recents buttons!

This app uses Accessibility services. Accessibility is used to detect when the physical or capacitive buttons are pressed on your device so they can be remapped to custom actions to accommodate your needs. It is not used to see what you type. Button Mapper does not collect or share any of your personal information, it is safe and your privacy is respected.

This app uses the Device Administrator permission. (BIND_DEVICE_ADMIN)
This permission is used to lock the screen if the “Turn screen off” action is chosen. If you want to remove this permission, open Button Mapper, click on the menu (three dots in the upper right corner) and select “Uninstall” 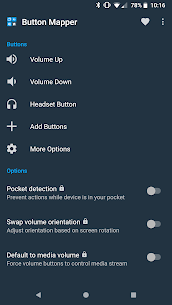 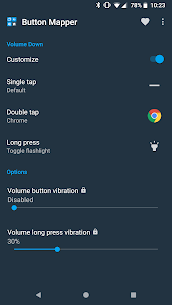 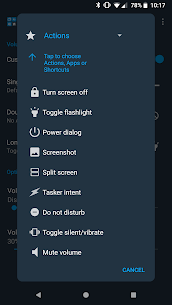 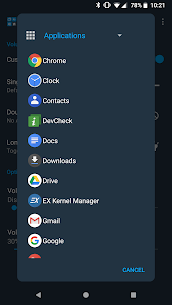 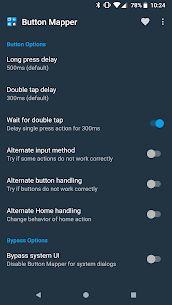 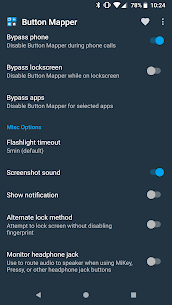 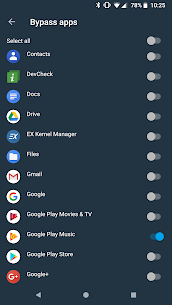